Join Our Newsletter
Shop Our Store
MAIN MENUMAIN MENU
By Craig Martin on February 27, 2017 in Crime 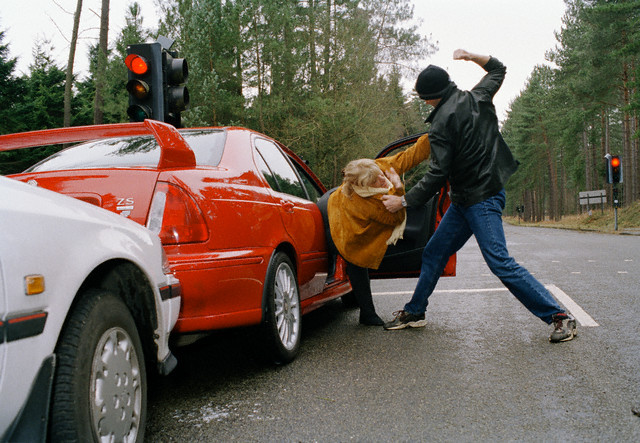 A man remains on the run after police say he tried to carjack a driver in the Central Bench neighborhood Monday morning. However, the would-be victim had something else to say about that.

The incident occurred near the intersection of Kootenai Street and Hilton Street at 7:43 a.m. on February 22nd. Police say that the suspect had run out into the street in front of a moving car, forcing the driver to stop.

“I couldn’t believe it, it was shock and fear,” said the unidentified woman.

The man then opened the victim’s car door and demanded the woman give him her vehicle as well as other belongings, according to investigators.

“He came to the driver’s side door of my car and opened it and demanded my keys and my purse and when I refused to give it to him he started hitting me in the head multiple times,” the woman said.

The would-be carjacker refused to give up.

“He got my face once, and my forehead once, and when that didn’t work he grabbed my hair and began pulling me out of my car and I finally said ‘OK, OK, that’s enough stop! I’ll give you my purse,” said the woman.

But that’s when things turned around.

“When I turned to give him my purse, I reached in my center console and I grabbed my gun and I pointed it at him, and it scared him off,” the woman said.

And with that, the driver was able to fend off her attacker sending him running southbound through an alley towards Overland Road.

The suspect is described as a light-skinned man with a skinny face. He was clean-shaven and wearing dark clothing, police said. The man was described as about 6 feet tall, slender, and between the ages of 25-30 and as of the writing of this article, he is still on the loose.

Awesome class. Both instructors were very easy to work with and very helpful.

My wife and myself attended their Idaho enhanced class while our friend completed both his Utah and Idaho enhanced class and we’re all very satisfied with the instructors Steve Adams, Brodie Riding, and Jim Richins and the way they were answering our questions and one on one help on the range. Made our accuracy much better and more confident. They made the class not only knowledgeable but fun as well. Would definitely recommend to anyone seeking one or both permits.

It was an awesome class and I learned a lot, but it was also great to review the things I did know, the instructor made the class fun and interesting, this is the only class I would recommend getting a concealed permit from!